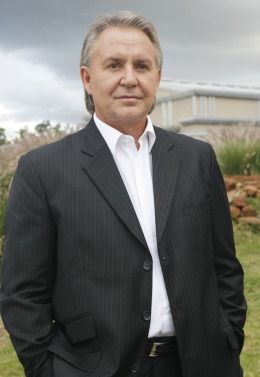 Tom Deuschle first stepped on African soil in 1979 with nothing but a guitar, a few hundred dollars, and a vision. Motorbiking through rural areas and ministering in homes, farms and on street corners, Tom started small cell groups with a handful of families during Zimbabwe’s civil war in 1979. Over 37 years later, Pastor Tom leads a church planting movement throughout Africa, Europe, North America and Asia. He is a devoted husband, father, and pastor, an established businessman, author and speaker, and is renowned for building people, building dreams and building the Kingdom of God across the globe.

Pastor Tom, together with his wife Bonnie of over 35 years, have raised their five children (Tommy, Jon, Ben, Dan and Sarah’ based on biblical teaching and principles in an ever-changing Zimbabwe to serve in a ministry that has persevered through severe trials and tribulations.

In addition to his dedicated family, Pastor Tom also pastors a congregation of over 25,000 members (with a goal of doubling in size in the coming season’. Over the years, he has raised up nation changers to impact the countries’ most crucial sectors in healthcare, education, government, business, finance, and technology.

One of the most impactful health organizations in Zimbabwe is Celebration Health, touching HIV/AIDS orphans, widows, the destitute, sick and diseased, rural areas and cities throughout the country. In 2009, “Operation Outstretched Hand” put a stop to the fatal cholera crisis sweeping the nation by supplying hundreds of thousands of dollars to fund the doctors and nurses salaries when the government was unable. Thousands of people fell ill in a weekend and many lost their battle. Through Celebration Health, Pastor Tom and his partners literally stopped this disease dead in its tracks. Over 33,000 people were given medical care through this outreach and 15,000 cholera cases were treated directly.

Pastor Tom is an established author, publishing several books: Building People Building Dreams, Surgical Prayer, and First Fruits. He is currently writing the sequel to Building People, Building Dreams, entitled Transforming Lives, Reforming Nations. Highly sought after as a pastor, business leader, and apostle, he ministers to many all over the world through a wide-range of forums encompassing business, government, and the local church.

A minister to leaders in the marketplace, Pastor Tom is a gifted mentor. Through “Kingdom Marketplace” ministry, he addresses heads of industry on a yearly basis and sits-down with several African presidents. He has trained several top businessmen in Zimbabwe, including Econet’s Strive Masiyiwa and Kingdom Bank’s Nigel Chanakira.

One of the greatest symbols of Pastor Tom’s vision for Zimbabwe and the world, is the Celebration Centre—a state-of-the-art multi-million dollar performance hall and church in Harare, Zimbabwe. Renowned for mobilizing Christian business people to build this 4,000 seat facility, the project was paid for in cash when Zimbabwe was experiencing the most astonishing hyperinflation in world history as prices doubled every 25 hours and inflation surpassed a world economic high of 6.5 sextillion percent in mid-November 2008. The national news and city critics said the building would never happen, but the Word of God activated local church members to engage their faith.

The Celebration Centre now stands as a leading beacon of what Zimbabweans are capable of creating, attracting international guests such as Hillsong United, John Maxwell, and Franklin Covey, and acts as a community center for the surrounding city—complete with an outdoor sports complex, school, restaurant, and amphitheater.

Celebration School, which is a growing K-12 school providing excellent education and leadership training. With a high academic focus, they also build leadership training and biblical worldview into the training. The school has a Kingdom expression, empowering the students from the ages of 5 to 18 years old to become men and women empowered to fulfill their Kingdom calling and purpose. The school has initialized a building project  to greatly expand the school’s capacity. This is the only internationally Christian accredited school in Zimbabwe (ICAA’.

Today, Pastor Tom travels globally spreading the Kingdom message and principles. He is passionate about working with other pastors and leaders teaching how to build the kingdom of God when the economics don’t make sense and when you’re the odd one out.

Most importantly, through Pastor Tom’s ministry each year many hear the Gospel message and come to Christ.

Celebrate International's mission is to transform lives and reform nations. Join us in reaching people across southern Africa through our work.

Meet our Celebrated Children. These Zimbabwean children are victims of HIV, poverty and have no families. We bring them into our family, give them a loving home, and teach them life skills. Everyone deserves hope in life.

Join our cause today to tell new stories